Lucky for us, we talk with our Pros every single day and have gotten to know them very well. We know their favorite sports team, ice cream flavor, and even their kid’s hobbies. You could say we’re pretty tight. While most of their jobs are routine, like clockwork, there are other times when sh*t gets crazy!

In this industry, you have to be in good shape. It’s physically taxing and only the strong (companies/Pros) survive. So, it was a complete surprise when former Pro of the Month Brian S. found himself in a situation that he couldn’t muscle out of.

While mowing a vacant property in Detroit, Brian heard a loud “POP, POP, POP!” He quickly shut off his mower and jumped off to see what he’d run over. Then, he heard it again. It didn’t take him long to realize he was being shot at. He’s not normally one to leave a job unfinished, but he has kids at home and his life was at stake. Brian loaded up his trailer faster than a freight train and hit the road, unscathed!

Pros encounter all types of critters from dogs and cats to snakes, rabbits, and even coyotes. On this particular morning, Anthony B. found himself mowing straight towards an abandoned fawn. He did his best to mow around the little deer, who was surprisingly undisturbed by his machine. At least Anthony can check meeting a real-life “Bambi” off his bucket list.

Our Pros always seem to be at the right place, at the right time. Near the end of his route, one Detroit Pro saw a neighborhood kiddo crash his bike into the pavement, hand over foot, right before his eyes.

The kid was scraped up and judging by the tears streaming down his face, more than upset. Without a second thought, our Pro turned off his mower, scooped the little guy up, and walked him and his bike back home safely.

4. Look Both Ways and Repeat.

It’s all too often (like once a month too often) we get a call from a Pro cursing up a storm because a careless driver backed into their truck and trailer.

So when James A. called in, we knew by the tone of his voice that something had gone horribly wrong. He hadn’t been backed into, even worse, he was full-on T-BONED! Mind you, he wasn’t driving old trusty, he was driving his BRAND NEW 2020 Shelby F-150. While this is Ford’s most powerful production truck, you can’t strong-arm stupid so this careless drivers’ mistake left both James and his truck out of commission for the rest of the season.

5. Not All Heroes Wear Capes.

Like any ordinary day, Blake H. arrived to cut the lawn for Suzy J. Just as he unloaded his mower, her neighbor came out of the house stumbling (0% BAC, mind you) and took a hard fall off the porch. Blake went from LawnGuru Pro to Superman in a matter of seconds after rushing to the woman’s side and calling the EMTs for backup. 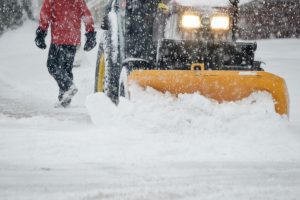